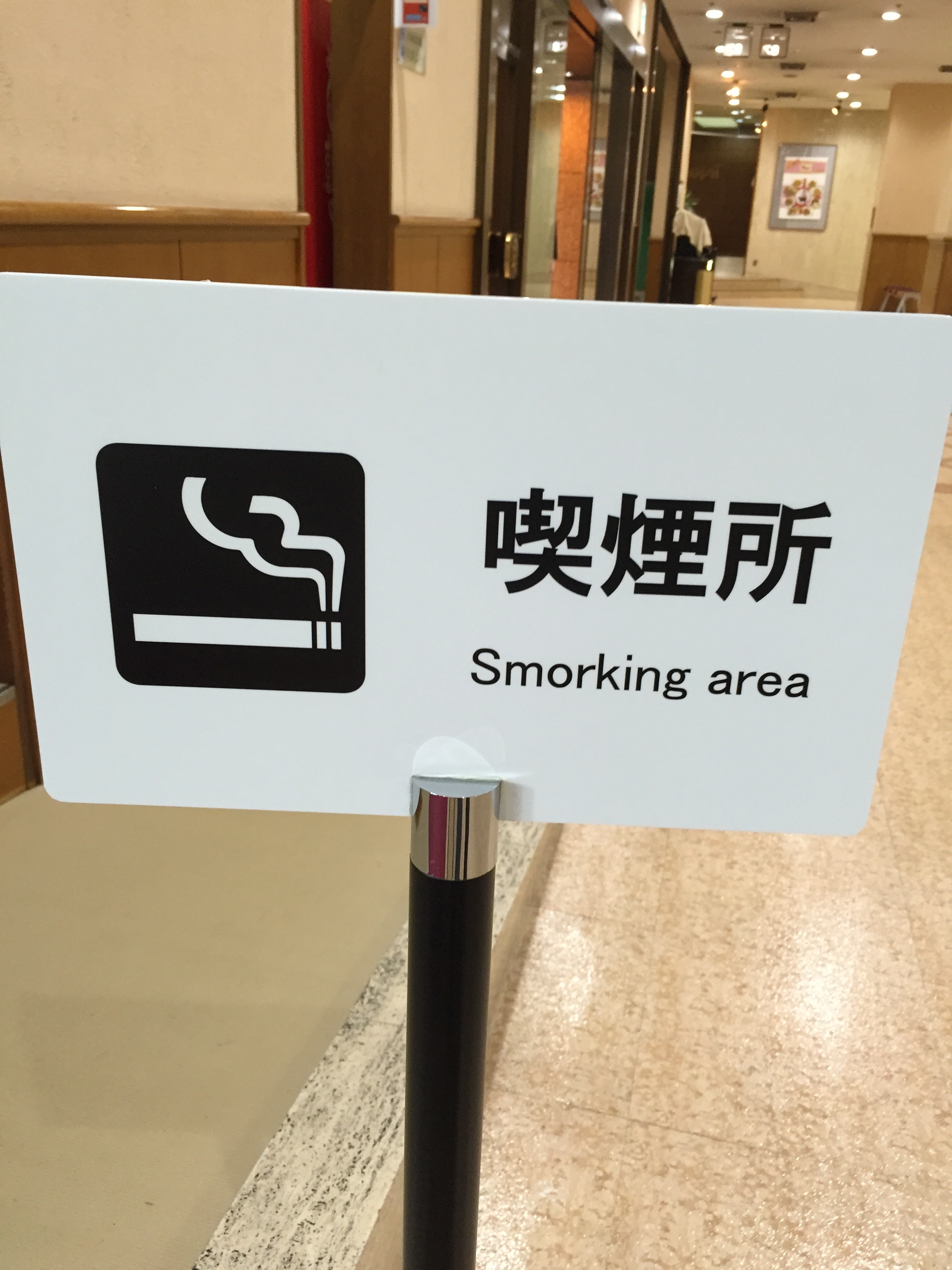 In the brief space of just a few months, I happened to come across these three English signs in Sapporo and Muroran with exactly the same spelling mistake.

The word used to describe the act of inhaling cigarette fumes is “smoke,” not “smoRk”. Had I come across only one sign with this spelling error, I would have shrugged it off as yet another English blunder on the part of someone who is totally incompetent. I certainly wouldn’t have gone to the trouble of writing this article.

But then the same spelling error appeared on rather new-looking signs at three completely different places… The photos I have posted below were taken at Hotel North City and the Kirin Beer Garden near Nakajima Park in Sapporo, and at Muroran Institute of Technology in Muroran. As you can see from the pictures, in each instance the word “smoking” is rendered as “smoRking.” So what the heck is going on here? Did all three places coincidentally hire the same incompetent English signage company???

It’s not like I have a slacker lifestyle and can afford to waste time regularly hunting for signs with blatant English mistakes on them. These three signs just happened to pop out right in front of me on my daily route to work. If one actually went about taking the trouble to look for them, how many signs with this same spelling mistake would one find in Sapporo or in Hokkaido?

When I showed these photos to one of my American friends living here in Japan, she feigned shock and exclaimed, “Oh my gosh, so then the invasion of the smorks has really begun!”

The somewhat obscure word ‘smoRk’ brings with it a conflation of meanings, but I think it wouldn’t be incorrect to say that it connotes someone who is a complete imbecile or a total dork. If you were to draw a picture of a smork, it would look like a little monster alien with a very low IQ. So when a native English speaker in Hokkaido comes across one of these ineptly translated English signs with the word ‘smoking’ incorrectly spelled on it, he or she is apt to crack a joke about it. For example, “Well, it looks like the smorks have been around lately” … “By the way, have you ever seen a smork?” … “I haven’t personally seen one, but when I was a kid our next door neighbor told me that she’d seen one!” ….

The reason that the signs seem so funny to us goes beyond the fact that it’s ridiculous that someone spending good money to create an English sign wouldn’t make sure that it’s printed correctly by checking the spelling in a dictionary or on the internet, or by asking an English-speaking foreigner in a cafe or bar down any street in Hokkaido. But there’s also the simple truth that in the “oke” syllable that helps to create the word “smoke,” one can hear absolutely no “r” sound. So why on earth would anyone write “smoRk” instead of “smoke”? And just what exactly is a syllable?

According to wikipedia, a syllable is a unit of organization for a sequence of speech sounds. For example, the word “water” is composed of two syllables: wa and ter. A syllable is typically made up of a syllable nucleus (most often a vowel) with optional initial and final margins (typically, consonants).

Well, there you have it.

One way that native English speakers at an early age learn how to form and remember new words, and how to spell them, is by playing with syllables by saying them aloud and then altering the first or last sound of each syllable. For example, “bake, cake, fake, lake, make, rake, sake … blake, flake, slake … brake, crake, drake,” etc.

A lot of words are formed based on the syllable “oke.” For example, joke (冗談、じょうだん), poke (突く、つく), Coke (コカコーラ), and of course smoke (煙、けむり; 煙を吸う、けむりをすう).

If you stick an “r” sound into the middle of “oke,” you get the syllable “ork,” which itself becomes the base for forming a lot of other words like pork (豚肉、ぶたにく), spork (先割れスプーン、さきわれスプーン), and work (仕事、しごと; 作品、さくひん).

The difference between the sounds of the words “smoke” and “smork” lies entirely in the sound of the “r.” However, not only do Japanese people have difficulty pronouncing the “r” sound, but it’s also impossible to voice an “r” sound by using just katakana sounds. And if one is unable to make the “r” sound, one will also be unable to hear the “r” sound when it is spoken, and the very existence of the written letter “r” will start to lose its meaning. This is because the ability to pronounce and the ability to hear sounds are closely linked.

There are just twenty-six letters in the English alphabet. In the Japanese katakana alphabet, there are forty-six characters.

However, in English, there are believed to be over ten thousand (10,000!) possible syllables that can be formed from nucleus vowels. So it would clearly be impossible for katakana sounds to even come close to being able to mimic the multitudinous sounds of English syllables. There are simply way too few katakana sounds!

If one relies on katakana sounds in order to pronounce English words, not only will one be unable to sound them out adequately, but the meaning of their written spellings will remain perpetually unclear.

Let’s take a look at the following examples of English minimal pairs:

The words in column A are pronounced differently from the words in column B, but in Japanese katakana pronunciation, most of these minimal pairs would sound exactly the same. If you didn’t know how the “r” sounds and how to sound the “r,” you probably wouldn’t be able to remember the spellings of these words.

So how can a Japanese person go about starting to pronounce and to listen to English in a better way?

Actually, it’s not difficult at all for Japanese children to imitate and pronounce the many different kinds of English syllables and sounds. They can even easily mimic the sounds of “r,” “l,” “f,” “v,” and “th”—sounds that are challenging to pronounce for most Japanese native speakers. What happens is that as Japanese children grow and get closer to entering junior high school, they start to be constrained habitually by the pronunciation of katakana sounds, and over time they gradually lose the ability to hear and imitate non-katakana sounds. Once they begin to rely on katakana sounds in the study of English at school, pronunciation skills start to fall drastically, and then along with that drop their listening skills begin to deteriorate. It’s quite difficult for students’ pronunciation skills to rise above those of their teachers, so as long as even the English teachers have difficulty hearing and pronouncing English, there will be insurmountable limitations to the quality of English education in Japanese schools. The best way to start improving your English skills is to stop depending on katakana sounds and to start learning how English alphabet sounds and syllable sounds really work in conversation and to practice really using them in real communication.

As an English teacher, I have substantial experience teaching composition, reading and literature to undergraduate American students at a well-known university in the U.S. I’m particularly skilled as a writing teacher, so feel free to use me if you would like to have private writing lessons. Please contact me if you’re looking for a native English speaker for quality Japanese-to-English translations in Sapporo. In addition to providing individual lessons in business English and everyday English conversation, I can also help get you prepared for English exams such as the TOEIC, TOEFL and Eiken tests.

At The Kirin Beer Garden, South 10, Chuo Ward in Sapporo

At Muroran Institute of Technology in Hokkaido